Circumstances facing young women in crisis pregnancies can be difficult to navigate. Oftentimes those she trusts the most are the least supportive of her current situation. In fact, many studies show that as many as 60% of women feel pressured to have an abortion. The lack of support from family and loved ones makes women feel like abortion is their only option.

This was certainly the case with one young woman who was ready to abort her unborn child. Both her mother and her boyfriend were convinced abortion was the right decision. If not for her, then certainly for them.

The young woman and her mother hesitantly stepped onto the bus where our caring professional team talked with both of them to understand how they felt about the news that she was pregnant. Soon it became clear that even though they both seemed to want an abortion, the mom had been pressuring her daughter into this devastating decision.

Our team offered to perform a free ultrasound, but the young woman was not certain what she wanted to do. While still on the bus, the abortion facility called to ask her to come back. She asked them if the $100 would cover the abortion pill as well as the consultation and the ultrasound. When they said no, she agreed to the free ultrasound on Baby Blue.

During the ultrasound, it was determined that the baby was about 8 weeks with a beautiful beating heart. The young girl texted her boyfriend knowing that abortion after a heartbeat is detected is illegal in Texas. He texted back that they would simply go out of state to "take care of it". Sensing a change of heart in the young girl, our Baby Blue team encouraged her to invite her boyfriend to come and see the baby. When the boyfriend arrived, he seemed irritated and barely looked up from his phone and it did not seem likely that his mind would change. However, once the nurse showed him the baby on the big screen monitor and he heard the baby's heartbeat, his countenance shifted.

With the encouragement of the nurse, the young woman and her boyfriend considered the option of keeping their baby.  Her mother, however, persisted in trying to convince them of the struggles they would face and how their lifestyle would change forever. The nurse kindly responded, "yes that's true, but you know what? God never gives you something you can't handle." And she continued, "the joy you feel once that baby is placed in your arms is something that cannot be described."

It was in that moment that despite the continued pressure from her mother, and knowing she would face struggles, that young woman chose love over fear and chose life! Thanks be to God! We continue to thank you for your prayers and support. 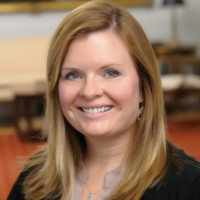